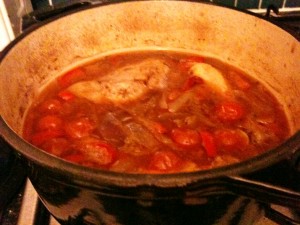 Yawning spaces opened up in the fridge. Lonely potatoes and tomatoes felt conspicuously exposed in the presses. There was a freezer full of long-forgotten sauces. Meanwhile, an excess of herbs, spices, and assorted condiments shrugged their shoulders, unsure how they could help.

But I was determined to eat what I had. With a visit to India just a week away, there was no point in buying more food, most of which would have been thrown out (incidentally, 30 per cent of the food we buy ends up in the bin, according to a survey by the Environmental Protection Agency).

Rocket and bags of salad are amongst the worst offenders, particularly when you’re not feeding a family. A humble tin of anchovies,  if you like them, can often come to the rescue. Roasted red pepper, rocket and tomatoes with anchovies, a simple dressing, and a baked potato saw the weight of the cupboards happily reduced. But there was more food to shift.

I’d recently received some of Superquinn’s new Ingredients range, which included bean mixes, gravies, stocks, salt, and the highlight: Taste No. 5 Umami Paste (€3.99).  Umami: the fifth flavour, hosted by such delights as anchovies, parmesan cheese, fish sauce, soy sauce, and the much-maligned MSG. It’s a flavour guaranteed to liven up any meal.

But what to do with this umami paste? I smeared it across some defrosted organic chicken legs and thighs, bought several weeks on special in Dunnes, let them marinade for a while, and desperately rifled through the presses for some other ingredients. Once again, cans of tomatoes to the rescue.

Taste No. 5 will go well with European or Asian food, and I think it would be particularly lovely on barbequed meats this summer.

Here’s what I found and made. It’s a very juicy, rustic and cheap, and it seems so easy that I’m almost embarrassed giving the recipe here – but it was delicious.

What delights have you created from storecupboard staples and foodstuffs that have outstayed their welcomes?