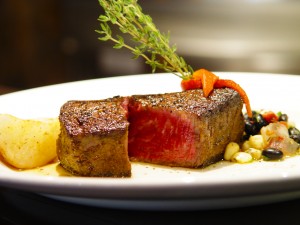 If you're a chef, you should get steak right

The starter was great but me and Keith both ordered T-bone steaks and at €33 a pop you would expect it to be perfect. We both asked for medium to well done and I explained to them that because I’m pregnant I should be having it cooked through so to make it closer to well done then medium.

So, steaks come out. Mine was barely medium and had lots of blood! No way could I eat it so I called the waiter, explained and asked them to cook it more. Now I was without my dinner and Keith had his (which incidentally was barely medium too, with some bits of the steak rare, and the sauce which he asked for on the side is all over the steak). He told the waiter when I was sending mine back but said he didn’t mind too much and kept it.

By the time my steak came back Keith was almost finished, and I was filling myself up eating a bowl of chips because I was starving and I didn’t want Keith to be eating by himself. I cut the steak and it was EXACTLY the same, and not hot so I don’t even think it saw the grill.

Now I had my steak, exactly the same way with a fresh chips and another pepper sauce! The maitre’d came over and asked was it okay; I told him it was exactly the same. When it arrived for the third time, it was still not really medium well, definitely more medium. I had also ordered fried onions which arrived at the start of the meal but by the time I had sorted the steak saga and eaten two bowls of chips I had forgotten about them and they were cold. All very annoying given it was meant to be our anniversary dinner, and probably our last meal out for a while before the baby arrives.

They didn’t charge us for my steak – we wouldn’t have been paying even if they did – and they must have apologised about ten times but the meal was spoilt for us by not being able to eat together.

Dessert was delicious though. Sticky toffee pudding, which arrived about 30 seconds after we ordered it (no exaggeration).

Dissapointing and don’t think I would go back after that. It’s meant to be a steakhouse and it worries me that they can’t even get steak right or basics like requests for sauce on the side.

I should point out that Keith had eaten in Marco Pierre White’s a few times previously, and never had any cause for complaint.

I’ve stuck to a simple steak rule for Irish restaurants, and it’s never let me down. Want medium rare? Ask for rare. Want medium well? Ask for medium. And so on. I’d throw the rule out for places like Shanahan’s, but far too many restaurants fail on this most basic score.

Have you been given a badly cooked steak? And where have you had a really good one?