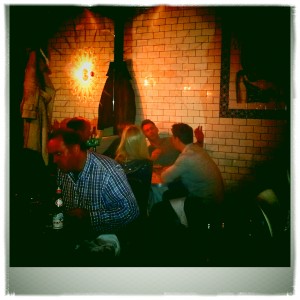 Years ago, I left a rather uninformed comment on this site about the sameyness of Mexican food. After having my pig-ignorant ears clipped, I stand by my statement that Tex-Mex food – basically, things wrapped in bread, such as burritos, fajitas, the hideously stodgy monster that is a chimi-changa – is quite samey.

Proper Mexican food is quite different indeed, but it’s been sadly lacking in Ireland. That’s why it was so delightful to hear about 777, a real, proper Mexican place on George’s Street from the people behind Dillinger’s and The Butcher Block in Ranelagh. The initial feedback suggested a slick marketing campaign and a hipster vibe. But what of the food?

Damien and I headed there a few weeks ago on the way to a Delorentos gig in the Button Factory, for which we’d acquired free tickets after some friends dropped out. Eating was kind of an afterthought, something we’d only remembered to do when it was 8.45pm, we were nearly at The Button Factory, and we were hungry. We figured we’d miss the first half hour or so of the gig. 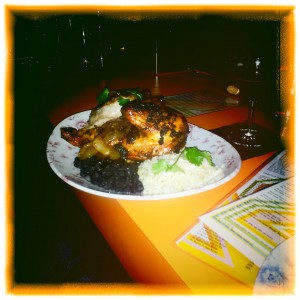 The simple exterior and frosted windows made 777 somewhat difficult to find. Once inside, we were immediately struck by the level of detail.The Mexican/ South American decor, the art works, the low lighting, and the tiling: they all work together to create one of the most atmospheric and interesting dining rooms in Dublin.

Just as much attention to detail went into the perfectly pitched service. It was friendly, informal and breezy without that awful, Americanised over-familiarity that could very easily seep into a place as “cool” as this. More important: it was efficient. The waiting staff knew their menu, the bar staff knew their drinks. I’d suggest Cinnamon‘s owners send their staff here to learn a thing or two about customer service.

Yes, but what of the food? It’s definitely not the cheapest meal you’ll get in Dublin. In fact, there’s an argument to be made that it’s overpriced. A “pre-starter” of tortilla chips – the Mexican equivalent of a basket of bread or some prawn crackers – are a rather startling €8. Or fresh oysters on the half shell for €1.60 each. The starters/ small dishes are mostly between €9-12,which is relatively hefty. They include crisp filled tortillas, tacquitos (mini-tacos, more or less), soup, and ceviche. Three starters, we’re told = one main. 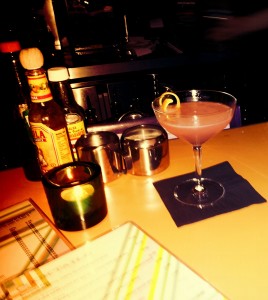 Remember how I said that we were in a bit of a rush? Well, after the first cocktail – a Violencia Roja (a rather expensive €11) consisting of gin, lemon juice, jalapeño and rosemary syrup, and creole bitters – time started to drift. This was an outstanding cocktail with a beautiful balance of flavours, and it tasted exactly like, I imagine, a hot summer’s day in Mexico. The Michelada cocktail – beer served over ice with tabasco, worcestershire, lime and chilli – sounded amazing, but too much of a hangover cure for a Saturday night. Also tempting was the ginormous selection of tequilas, but restraint kicked in.

The mains themselves were excellent. Roasted organic chicken, served with smoked onions, white rice, and black beans, cost €22. Really delicious, tender and juicy chicken with a salty, smoky marinade, cooked over a wood-burning grill, with some simple and well chosen sides. This was big enough for two; a smaller portion would have done fine, and could have been cheaper. Damien, however, had no complaints.

My own main  was a braised beef short rib with smoked bacon, sweet camote (sweet potato) and molé sauce (a concoction of Mexican ingredients simmered into a thick, sweet sauce), and cost €20. The beef collapsed from the bones, and then I wanted to suck the bones. Not the cheapest but, I hesitantly say, worth the money – if you have it, of course.

Strip aside the hype, the perfectly pitched marketing, and the subtle shop-front which suggests that only those in the know should eat here, and this new venture is a very welcome addition to the city. A decent grill is long overdue in Dublin – though I’ve yet to try Joe Macken’s new place, Bear – as is a real Mexican place. 777 wouldn’t be my first choice when money is tight, but I reckon it’s a surefire bet for a really lovely treat in and around pay day.

Oh, and that Delorento’s gig? Sorry to the Delorento’s lads – especially Níal – but the food, service, decor and atmosphere in 777 led us astray, and we lost track of time. When we looked at our watches, it was 11pm. We’d missed the show.