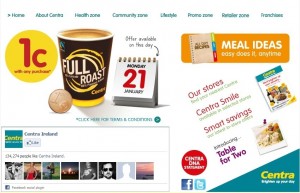 Update, Jan 23: 10.40am: A statement from Centra was received last night and is published in the comments below. Customer comments about the promotion can also be found on the Centra Twitter page.

It seemed like a great deal and a wonderful treat: coffee or tea for one cent with any purchase in Centra. Radio ads and websites promoted it, while we blogged about the deal on this site.

But the deal was, intentionally or not, very misleading, and many Centra customers have taken to their Facebook page to express annoyance. Here’s the problem: around one in five Centra shops were not taking part in the promotion, but customers had no way of knowing this before they went into the shop.

I was in Centra on Kilmacud Road in Stillorgan, where the staff had no clue what I was talking about when I said I’d buy the one cent coffee. Luckily, I had the good sense to ask before I made my coffee and took it to the counter. In this instance, the manager relented: turned out they were taking part, after all.

Later, in Centra Rialto, they didn’t know about the promotion and wouldn’t honour it. In Stoneybatter, Lisa Saputo said “They thought I was gone mad when I asked in Centra Stoneybatter.” On Camden Street, another commenter paid full price before going back and asking for a refund, which she didn’t get as the shop wasn’t participating. In Cork, regular commenter Claire said she was “laughed out of the Fermoy branch of Centra.”

How Centra’s customers were let down

In response to annoyed customers, Centra said: “Although the vast majority of our stores are participating in this offer, some are not as outlined in our advertising – In participating ROI stores only.”

The company’s response is utterly inadequate: in many instances, it was not outlined in their advertising.

The little detail “in participating stores only” is down the bottom of a list of T&C’s on a pop-up page on their website. If somewhere between 15 and 20 per cent – Centra have not yet been able to provide definite figures – of shops are not participating in a promotion, this should be highlighted in the ad, not deep down the small print.

Here’s the Centra ad on yesterday’s Today FM: “Are you feeling the Monday blues? Pop into Centra today and get a coffee with any purchase for only one cent. That’s right, just one cent. See in store for details. Brighten up your day.” No mention of the major detail that up to one in five stores are not participating, just a vague instruction to go into the shop and check for details. Which, for many customers, will have meant going to the counter with their coffee or tea only to be told they had to pay full-price. I wonder how many of these customers were too embarrassed to complain, or too tired for a confrontation, and paid full-price.

Why bother going to Centra for a deal?

I understand that Centra is a franchise and that the shop-owners have some autonomy, which is welcome (although last year, some of the Centra shops used their autonomy to advertise alcohol as part of a “Children’s Allowance Day” set of special offers).

But how on earth is the average customer to know the finer details of the business? They just want a coffee or a tea because they trusted that the shop was honouring a deal that it widely advertised. In many cases, they will have gone out of their way for the tea or coffee.

The odds of not getting the deal – one in five – are too high; Centra should have made this clearer to their customers. And anyway, tea, at a generous estimate, costs five cents; the cost of raw ingredients for a cup of coffee (with grounds, not instant) is about 40c – it would have cost the non-participating stores very little to honour the deal.

Centra said to their customers: “We’re sorry that you didn’t get to avail of this offer this time but we hope to have many more similar promotions throughout the year.”

But why should any customer go out of their way to check out one of their future advertised offers if there is a strong chance that they’ll be laughed out the door? How many other advertised deals will your local Centra not be taking part in?

Centra’s handling of this entire promotion was, at best, sloppy. I certainly won’t be going out of my way to go to Centra on the basis of an advertised offer again. Centra should stop acting as though it’s the fault of their stupid customers and admit that they got this one wrong.

Last word to CheapEats commenter Brian Hughes: “The ‘participating stores’ opt out is frustrating. If you are going to take advantage of all the benefits of chain participation, you shouldn’t be allowed to opt out on marketing promotions.”