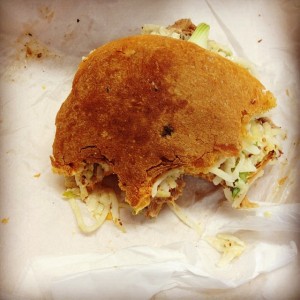 If you’re a Twitterer you may already be aware of Killer Sandwich – an ingenious and delicious food project from the clever people at Mr & Mrs Stevens. They’re designers but their love of food inspired them to start this extremely tasty sideline. Here’s how it works:

The team make just 70 sandwiches each week and put extraordinary love and care into each ingredient.  I tried their ‘Utter Swine’ sandwich a few weeks back – Yard-smoked Pork shoulder, Celeriac & Apple Slaw on an Arun Bakery jalapeño Vlaa. It cost €6 and was sublime beyond belief. 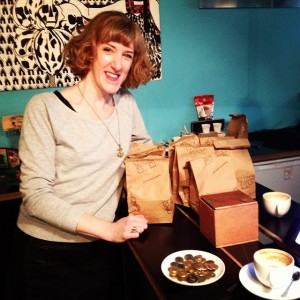 Mrs Stevens and some bags of deliciousness all ready to go

I love this whole concept – my first reaction to having to book two days ahead was that it was too hard to predict if I’d want that lunch on the Friday, but then quickly realised that in fact it’s a nice thing to look forward to. Not every sandwich will appeal (egg mayo? No thanks!) but on the weeks that they have fillings that you like, you can be confident that it will be beautifully put together and delicious.

Killer Sandwich is a side project for Mr & Mrs Stevens and shows that it’s possible to work in food without a huge investment in a premises. Word of mouth has made this really popular, and the pick up places are spots that serve drinks but not sandwiches, so they complement each other really well.

This week’s sandwich has just been announced and it sounds SO GOOD. If you want it, go order it fast.

*Locations have included spots such as Tamp & Stitch in Temple Bar and Wall & Keogh in Portobello – it’s specified each week.