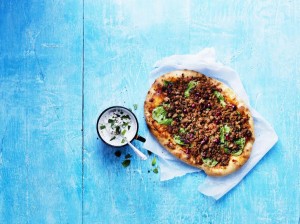 I wandered into the void of deliciousness that is M&S last week to pick up a Father’s day voucher. It’s not the cheapest: it’s just never ever going to compete with Aldi on price, and it’s possibly not where most readers of CheapEats are doing the full weekly shop. I’m certainly not. But right now there’s some very good summer deals and lovely treats in there which are forming part of my regular shop.

I’m a bit of a fiend for the three for €8.50 ready meal deals and have a slight addiction to their spinach and ricotta cannelloni (it’s low calorie!), but I think less than €2.85 for a portion of very tasty dinner is not too shabby.

I also picked up two big punnets of strawberries for a fiver, and there’s lots of other good deals as part of their “Summer of Flavour”. Cherries were half-price and were so juicy and sweet. And I got a free bottle of wine with four picnic items, including a “Mediterranean Tart”, a spiced lamb firebread (pictured), a big tub of olives, and a whackload of delicious antipasti, for just under €17.

The “Summer of Flavour” also includes regular deals on BBQ meats and such unexpected delights as chocolate coated wasabi peas and jelly sweets with a hint of chilli.