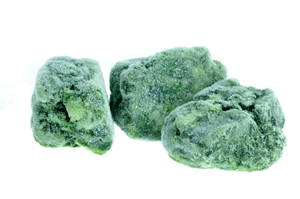 When cooking purists give you recipes that include spinach, they will always tell you to buy fresh spinach and wilt it down. This is one area where I tend to cheat, as I find that frozen spinach works just as well and is much cheaper. Fresh spinach is delicious in salads, but I wouldn’t bother with cooking it, as even a large bag wilts down to almost nothing.  And you’ll never notice the difference in taste, especially if it’s going into a slow-cooked dish.

Frozen spinach is a really handy staple to have in your freezer – you only need a couple of blocks for each recipe so a single bag will go quite far.

This soup is a great comfort food, and less bland than Leek and Potato Soup.

This will make about four bowls, and the soup is really good with brown bread.  You could add cream towards the end if you like, although I find the potato makes it creamy enough.