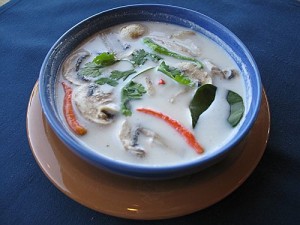 I’m trapped in the snow, deep in the Wicklow Mountains. The phone is no longer working. This machine is my only lifeline to the outside.

Luckily, I’ve been preparing for this eventuality. For many years.  There’s meat and frozen veg in the freezer, chocolate stashed under the bed , and unlimited tins of tomatoes and coconut milk.

So much coconut milk, that I’ve decided to make it the ingredient of the week. I reckon this will be particularly lovely for anyone battling the sludge and coldness, or if the snow has disrupted your life and contributed to stress.

Coconut milk is full of good fats and its heartwarming feeling comes with a zing. You’ll find it not only in Thai cuisine, but also in Malaysian, Filipino, Indonesian, Indian, Vietnamese, West African, West Indian, Hawaiian, Caribbean, and Brazilian.

This is a variation of Tom Yun Gai soup – one of Thailand’s best known dishes – and it’s different from the usual because it contains cocount milk. It’s a recipe from my friend Phil, whose company Kho Ka-jee will soon be supplying their amazing Thai curry pastes to restaurants around Ireland. This version, which uses coconut milk, is slightly less common.

I’m making a big survival pot that will last us for a few days, and which tastes even more delicious the longer it cooks for.

If you’ve got any interesting recipes involving a lovely bunch of coconut milk, please let us know.