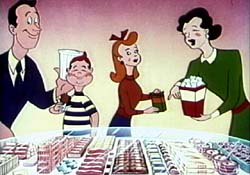 Ok, maybe laughing in his face and ignoring him wasn’t very nice. But when a staff member in Movies at Dundrum Cinema kicked up a fuss because I was bringing in a bag of popcorn from – ooh, whisper it – the outside, I honestly thought he was joking.

I arrived at the counter with some outside tap water in my own container, which I was told I should not bring inside. And I shouldn’t really be bringing the outside popcorn inside either, he told me. In fairness, he was very polite, but only because he seemed to implicitly acknowledge the absurdity of the situation.

I was at the counter because I’m an absolute sucker for the shiny pick and mix displays in cinemas. They stung me over €5 for a tiny bag of sweets that consisted largely of flogs (if you want to save money on pick and mix, buy flogs, as they’re bulky but weigh very little – just not in Dundrum). I skulked into the screen  with my bag of Manhattan popcorn shoved under my coat, feeling a bit like a toddler hiding a bun I stole from my mammy. Seriously: is this a cinema? Or a jail?

Some cinemas are offering deals; popcorn, drink, and bag of sweets for a set price, but even these are usually way pricier than you’d get in a shop. It’s still relatively expensive to go to the cinema in Ireland, especially if they’re going to monitor our nibbles and demand that we buy their limited selection of extortionately priced food.

I feel totally justified taking in outside food to any cinema. A few snacks is part and parcel of the cinema experience for me and many others, and I’m not willing to be fleeced by their unjustified prices, so it’s either that or not go.

What do you think of the price of food in cinemas? Noticed any good deals? And do cinemas have every right to prohibit outside food?