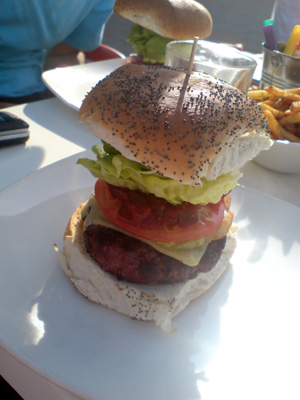 There’s some days where a gourmet burger, overpriced and bereft of inclusive chips as they are, can really hit the spot. Tuesday was one of those days, so I stopped off for a gourmet burger in Dun Laoghaire on the way to the Forty Foot for a swim. 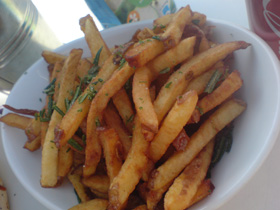 The Real Gourmet Burger is located on the Pavillion in Dun Laoghaire, that little strip of restaurants and cafes facing the sea, close to the DART station.  It’s a nice spot to sit outside.  We had one cheeseburger and one guacamole burger, with a side of skinny chips.  The skinny chips were €3.50 – not the most expensive chips I’ve ever had in a gourmet burger place, but still quite overpriced for chips.  They were tasty though, and cooked with rosemary, which was a nice touch.  The burgers were very good and similar to what you get in the other fancy burger places, all for around the €10 mark.  Our meal came to €29 for two burgers, one chips, one beer and one soft drink, but that happily fed two adults and one small child.

So for burger fans, this place is worth checking out if you’re in Dun Laoghaire:  it’s nothing dramatically different from the other gourmet burger places, but the burgers are good quality.