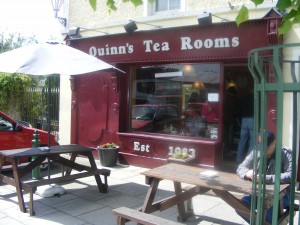 On the very tedious road from Dublin to Cork a few weeks ago, I inevitably got a bit peckish. Since the motorway opened, Abbeyleix and Durrow in Co. Laois are now the two main stopping points.

In Durrow, there’s the Castle Arms Hotel, which always seems to attract a fair amount of business. I ate a lovely bowl of Leek and Potato Soup and a Ham and Cheese sandwich here, with real thick slices of ham, for about €7. The rest of the menu seems a little bit expensive for what it is although, in fairness, I haven’t tried anything else on it. A few friends have praised Durrow’s The Copper Kettle as a good spot for cheap eats.

There’s a great old man’s pub in Abbeyleix called Morrissey’s, where I’ve had a few sandwiches and bowls of soup over the years. Plain, simple, old-fashioned pub food, but grand for a bite of lunch. Just around the corner from the church on the hill, where my friends Kieran and Elaine recently got married, there’s a lovely looking cafe – Cafe Odhran – which I’ve yet to try. Also yet to try: the Abbeyleix Manor Hotel, which appears to serves your average pub grub.

Then there’s Quinn’s Tearooms, which has all the charm and grace of a wake for demons. I was greeted by a rather limp display of sandwich ingredients and slices of quiche on small plates. After questioning the waitress at length about what was on the menu before she finally, almost grudgingly, handed one over.

One of the items immediately caught my attention: that small slice of quiche, served with chips, cost €11.90. Pass. Not particularly enticed by anything on the menu but too hungry to leave, I eventually – stupidly – chose the Vegetable Soup.

For the life of me, I’ve no idea why I didn’t send it back. This small bowl of watery and tasteless soup, with two stodgy slices of brown bread, cost an obscene €4.90. I’d had better soup in the UCD canteen, back when it was really piss-poor indeed. The staff were cold and unfriendly, and almost seemed to resent that they were working there at all. I couldn’t wait to get the hell out but, even though there were three staff and there were only two other tables being covered, I had to wait for five minutes to pay.

When you go into a cafe with a bright and sunny disposition, and leave feeling annoyed and glum, you know it’s best not to return. And I won’t be.

Over to you, readers: any recommendations for the Cork-Dublin road?