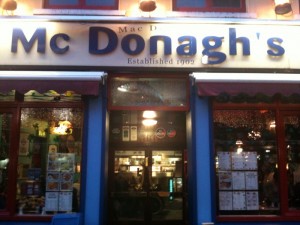 So there we were arguing about why we were in Galway, shouting about whose turn it was to be designated driver, and having tantrums about what our future really held together.

Thankfully, however, all four of us agreed that we should have fish for dinner. McDonaghs in Galway City has been feeding people whatever the sea is willing to offer for four generations. There’s even a picture of some loser from hit TV show LOST on the wall. You can’t argue with that. Nor can you argue with the freshness of their seafood. I thought the lobsters were literally going to jump out of their pots and snog me.

One of our group of four went off to continue crying while the rest of us sat in the restaurant part (it is also a regular chipper but has a fully licensed restaurant). So many fishy options.

McDonagh’s fish soup (€5.25) was ordered by all three of us to start. Filled with seasonal fish and cream and general loveliness it is, in effect, a chowder-like soup. I’m wary of labelling it a straight up chowder as some zealous CheapEats reader might chastise me. But it felt that way to me.

For mains I ordered the deep-fried and battered cod with homemade chips and mushy peas (€13.50). Ooh me grapes it was delicious. Hadn’t had cod in a while because I’m from Dublin and everyone in the capital is so right on and aware of how our fishermen are pillaging our oceans of cod blah blah blah…….

My ugly ethnic friend went all out and got seared scallops with black pudding and crispy bacon served with salad (€15.95). This was beautifully presented and really tasty. We were all impressed and wanted to steal from him but you know what these ethnic types are like (I think he’s from England or somewhere ridiculululous like that). My weasely friend once again disappointed us all by ordering a salad (€6) with homemade chips (€2.75 ).  Nevertheless both were really tasty.

Having the chipper next door gives the added advantage that the place takes their straight up fish and chips quite seriously while also offering snooty shite like scallops and pudding. There’s loads more on the menu and I would love to go back and try their fish pie (I saw some man eating it and wanted to go over, stab him with a big trident, and take the pie). Our bill came to €55.