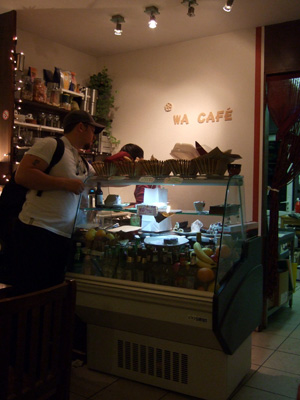 I split my (beautiful! sunny!) long weekend between Galway and Limerick, with the express intention of eating out in both places. It didn’t quite work out – I was only in Galway for one night and food took a backseat to booze, I’m ashamed to say.  And in Limerick, the restaurants that I wanted to try were closed for the bank holiday.

However I did make myself very slightly useful in Galway by going for a late night snack in Wa Cafe, and finding it to be both very nice and quite unusual for a post-pub option in Ireland.  It’s a small but inviting Japanese cafe, which serves hot food and sushi.

It was pretty late when we got in there, but there was still sushi to be had.  I had one chicken teriyaki roll and one salmon roll; both were about €3.50 and were large rolls that if sliced, would probably have made about four small pieces each.  The sushi was very good and I found the two rolls were quite satisfying, even for someone who had substituted dinner for a skinful of booze.

Best of all, the atmosphere was calm and friendly and it was a world away from the usual horrible, neon-lit, late-night takeaway vibe.  I will definitely go back to the Wa Cafe next time I’m in Galway, to try out their main meals.

Wa Cafe is located on New Dock Street, just around the corner from the Harbour and the Spanish Arch.