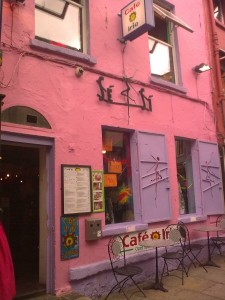 Don't be fooled by the pretty building

It was once the jewel in the tawdry crown of Temple Bar, one of Dublin’s nicest little lunch spots, a gorgeous little hideaway with friendly staff and really special food.

So it brings me no pleasure to report that Cafe Irie has fallen off a cliff. I went there for lunch with my departing flatmate Paula yesterday, and we both noticed the place had undergone a few minor cosmetic changes: new tablecloths, a few new pictures.

Pizzas and – oddly – stir-fries are a new addition to the menu at Cafe Irie. I opted for the good old reliable Veggie Club (€7.50). It’s always been something you wouldn’t be able to put together yourself at home, full of yummy melted cheese and lovely spreads. But this was adequate at best: the grated cheese was a little bit melted and a little not, the sandwich was overwhelmed by iceberg lettuce and semi-sundried tomatoes – is this 1997? – and, overall, it was a pale imitation of what was once amongst Dublin’s greatest sandwiches. 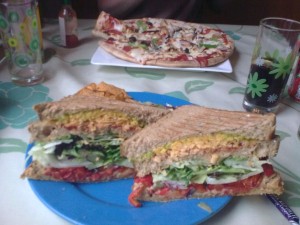 Paula’s pizza (€9.95) was awful. Nay, utterly inexcusable. The base had the texture and flavour of strong cardboard; I’m pretty sure you could have snapped it in half and dust would have flown out. The toppings were cheap and nasty. It was several pegs below the pizzas they make up for you in supermarkets; Cafe Irie would be better advised to bung a Goodfella’s in the oven. If you want a better pizza for a fraction of the price, try the deli counter at Centra – and that’s not praise for Centra.

In fairness, the service was good, but this place has lost its heart and atmosphere. It’s offensively clear that the owners have ceased to care about the standard of the food they serve. What a shame.

We thought of complaining but this is a tiny cafe and there didn’t seem to be any sign of a manager around so we just wrote it off. It’s only when I sit down to write this review that I really regret not kicking up a fuss.

The exorbitant bill for two lunches, a cranberry juice, a glass of Coke, and a latte was €25.05. I won’t be going back.