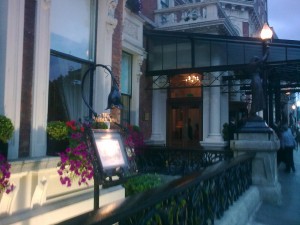 My highlight of Taste of Dublin: steak frites from the Saddle Room. Simple, unfussy, and perfectly cooked.

The Shelbourne Hotel lost its character when it was revamped, but its restaurant seemed reason enough to visit. I headed there with our good friend Geordie Sue a few weeks ago to check out the early bird menu; €22 for two courses and €25.95 for three. It’s quite a large space with an open kitchen, lots of waiters buzzing around, and quite a few covers. The early bird seemed a popular option, but the crowd thinned out as the night went on.

Having so thoroughly enjoyed The Saddle Room at Taste, I had high hopes. Both Sue and I opted for a carpaccio of tuna starter, served with a sesame and soy sauce. The starters arrived promptly, but one of them was not what we had ordered. No problem, it was immediately taken away and replaced within a minute, with a very nice (although unnecessary) apology from the manager. We were even offered an extra drink as an apology. Excellent customer service, but I declined the kind offer.

My main, sadly, was a real letdown. The confit of rabbit was served with soft polenta and what I can only describe as a “red” sauce (not ketchup). The meat was succulent and well seasoned, but the soft polenta had the texture and flavour of lumpy cheese sauce. This was a horrible mismatch. The red sauce was, presumably, primarily meant to add colour to the dish. But it also added a slightly unpleasant blandness. Everything about this dish – from its inception, through to my stupidity in ordering it and the final creation – was a mistake. I wonder what on earth the kitchen were thinking. That said, I don’t think this will be on the menu again.

Sue’s main fared much better: fresh hake with chorizo. Fresh, well executed, and the fish not smothered by the richness of the meat. Both meals came with fresh vegetables, cooked al dente, and some chips.

We both opted for dessert: Sue’s meringue was sweet, soft, and chewy as it should be, dripping with bright, fresh fruit and thick cream. My lemon tart was pleasant, although there was a little too much pastry and meringue topping, and not enough lemon.

Now, I know some readers will question why I didn’t kick up a fuss about the rabbit, and point out that it’s a bit unfair to complain now. But the truth is… I just wasn’t that bothered at the time. It was okay, it was edible. Sue and I were having a lovely evening, and I didn’t feel like a fuss.

They’ll be more surprised when I say that despite the disaster of my main, I’d be inclined to give The Saddle Room another go. The service was professional, the atmosphere was fancy without being too stuffy, and most of the food was good. I think it’s worth another try.