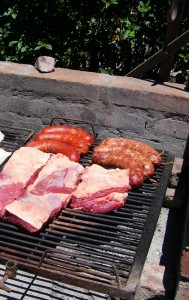 I’d heard some pretty awful things about Buenos Aires Grill, the Argentinian restaurant off Aungier Street beside the Radisson Hotel. Multiple bad reports, including from people who’d eat pretty much anything and never complain, put me off ever going. When a friend chose it for his birthday dinner, I figured it couldn’t be as bad as everybody said, and reasoned it would be a chance to give it a try. I didn’t warn him of the anecdotal stories.

This so-called Argentinian restaurant is laid out exactly like a million forgettable hotel restaurants anywhere in the world. On the Saturday we arrived in a party of ten, it seemed enormously popular with almost all tables taken.

It quickly became clear that the only Argentinian aspect of this restaurant was its misleading name. It’s not an Argentinian restaurant when the menu contains monkfish tempura with yakisoba noodles, green curries, tandoori chicken wings with a guacamole dip, cajun spiced chicken fillets, gnocchi, and shellfish rigatoni.

It’s not an Argentinian restaurant when the only dish of the Americas is chimichangas: a deep-fried burrito and Tex-Mex creation.

It’s not an Argentinian restaurant – especially not a steakhouse – when the steak is not the delicious, richly flavoured beef of Argentina. No, this beef, the waitress informed me, is from Ireland. I’ve heard whispered travellers’ tales of Argentinian beef that left them in a trance; I’ve seen friends return from travelling the world with as much weight as a stick insect, while those who return via Argentina waddle back into my life with a few extra pounds of pure beefsteak. This steak, however, was not a piece of meat that could leave any discerning human being feeling satisfied.

It’s not an Argentinian restaurant when the steak is vastly overpriced, tasteless, tough, and infested with gristle. So poor is this restaurant that I almost felt sorry for the chefs working with such desperate ingredients. Almost – until my tasteless, tough rib-eye, priced at TWENTY-THREE EURO, turned out to be nowhere near the medium-rare I’d ordered. Somehow, it was rare in parts and overcooked in others. Quite an achievement. The only reason I ate it was because it was as bearable as any third-rate restaurant in any depressing three-star hotel, I was starving, giving it back would have meant no food at all, and I just didn’t have the fight in me. The pepper sauce was as acceptable as any powdered Knorr product.

As the restaurant, on a Saturday night, had somehow run out of both the mackerel with fennel and orange salad, as well as everyone’s favourite Argentinian starter – sesame crusted fish cakes with cucumber noodles and chilli jam – I ordered “bread with dips” for €4.50. The hummus tasted precisely like stodgy air, the pesto lacked any hint of pecorino cheese, and the third dip forgot its own existence. All were served with some miserable toasted baguette.

Somehow, this awful place has been open for several years, while all around it, much better restaurants are going bust. I can only assume that they’re sucking in a combination of tourists, people with no taste, suckers, and fools. At no point during our sad excuse for a meal did any waitress ask if everything was okay – presumably because she knew that, as a matter of course, the meal is never okay in this rip-off restaurant.

The chips were the only saving grace. Big, perfectly cut, crisp and fluffy, I wanted more.

Aside from that, this restaurant was met with near-universal derision by most of our party of ten, who felt that it was vastly overpriced with poor service and mediocre food. Except for myself, none of us could be described as particularly fussy.

A reminder: you’ll find a flawless rib-eye in Fallon and Byrne, an infinitely superior restaurant, plus a starter or dessert for €24; Le Bon Crubeen do a very good sirloin with chips and salad for €13; and The Larder run a special offer on steak plus chips and salad for €10. You’ll find two of the best steaks in Ireland at Aldi for just €12-14. All of those steaks vary in quality, but all are very good value. But if you’re in the mood for poor quality and bad value, the Buenos Aires Grill won’t let you down.