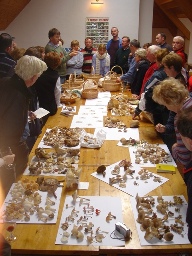 I’ve always been fascinated by mushrooms. They were the first food I ever gagged at; the very thought of eating them, in soup or whole, makes my throat close over.

But I also have a profound respect for the kingdom of fungi: without them, nothing could ever decompose, and nothing new could grow, us included. I saw some wonderful and weird mushrooms in Borneo, including specialised parasitic fungi growing out of an ant’s head, edible forest mushrooms, and whole colonies growing on rotting rainforest logs.

So, as with humans: I like them,  I just don’t want to eat them. Still, I’m quite tempted to attend one of the upcoming Avondale mushroom hunts. Taking place on Saturday September 29 and Saturday October 6, and organised by Bill O’Dea of MushroomStuff.com, the days kick off at 9.30am with tea and scones in Avondale, Co. Wicklow. I’d have to pass on the wild mushrooms and soup at lunchtime, but I might be able to gobble down a few sandwiches and dessert.

Mushrooms are an excellent source of free food, and plentiful at this time of year. The trick is knowing your boletes from your amenitas, or you could end up very sick – or worse. Bill and his team have been running the course for 15 years and have identified up to 120 different fungi at Avondale, including many edible varieties.

Readers, what are you feelings on the humble mushroom? Are you mycophilic or mycophobic?