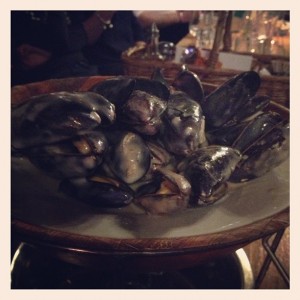 I know, I know.  We were stupid to go to Johnnie Fox’s in the first place. It’s a tourist trap, everyone knows it’s a tourist trap, and you get what you deserve if you go somewhere like that. However, our experience in Johnnie Fox’s was so bad that I just have to post about it.  At the very least, I feel I should reach out to the staff there and show them that their suffering has been noticed.

So here’s what happened – a big group of us (about 15 adults and 10 kids) went for a walk in the Dublin mountains on the first Sunday in January. It was lovely!  It was a fresh day and we stretched our legs and the kids ran about and it was great.  We had said we’d go for a pint and some chips, and someone suggested Johnnie Fox’s in Glencullen. There’s not a huge amount of choice up there, and Johnnie Fox’s, while touristy and a bit overpriced, does serve very good pints.

So we went there and were given a table in the ‘Hooley Room’ (ugh) where a band were tuning up.  A bit of live music on a Sunday afternoon is nice, right?  Except of course if the music is amplified to a ridiculously loud level, one so loud that no conversation of any kind is possible and you walk away with a pounding headache.  Which is exactly what happened there.  The volume would have been suitable for 2am in a raucous bar on New Year’s Eve, not a Sunday afternoon where lots of families with kids were present.  Why? Who on earth is it supposed to be enjoyable for?  Do they think their visitors are profoundly deaf?

If it’s a technique to get people to eat up and leave quickly, it’s a massive bloody failure, because the service was so incredibly, bafflingly slow.  We made it clear to the waiter that we weren’t having two courses; some people were having main courses, others were just having soup.  Regardless, the soup arrived on its own and then an incredibly long wait followed.  After an hour (no exaggeration) and having asked a number of times, about four of our party gave up and told the waiter that they had to go.  The kids were on the verge of meltdowns from the noise, waiting any longer would not have been an option.  The waiter said that the dishes would be removed from the bill, but when it arrived only one had been taken off rather than four.

One of the group complained to the manager about the service and the very unclean toilets, and in her words, “he didn’t give a f*ck”.  He also asked her to move from her table while she was still feeding one of the kids, despite the fact that no-one was waiting for it.  And then – then! – the waiter followed the same person out to the car park and asked her to pay for the entire meal, even though he knew the rest of us were still there and had moved to another table.  That was another mess – we asked to move tables as the noise was so unbearable, and we were told that the table was ready but not shown to it.  Various staff members kept gesturing to the back of the restaurant, but wouldn’t escort us there, and as the place is huge and has loads of different rooms, we weren’t able to find it.  The only assistance they would offer was telling us to move when we sat at the wrong empty table, but still refusing to show us to the correct one. Argh.

I don’t blame the staff for this by the way. They are working in dreadful conditions.  No one should be subjected to those noise levels, and I’m sure they have to bear the brunt of the frustration that the customers feel.

And how was the food in all this?  When it finally showed up, it was fine.  The food isn’t bad in Johnnie Fox’s although the main courses are a little overpriced.  My small bowl of chowder was €6.50, Jambalaya is €16.95, and a good starter of mussels in creamy sauce was €8.95  In a particularly egregious bit of nonsense, they don’t serve chips. There’s some drivel on the menu about their “refusal to move with the whims of modern society”, which as my friend Tom said, is “a little hollow in the face of posters plastered all over the toilets entreating one to “like” them on Facebook”.  Plus instead of chips on the children’s menu they serve potato waffles which are 1) more or less the same goddamn thing as chips and 2) along with Jambalaya, not exactly a mainstay of traditional Irish cuisine.

Places like Johnnie Fox’s meet a need (paddywhackery for tourists) but that doesn’t make it okay for them to treat their customers with such contempt. Tourists are people too, with normal fragile human eardrums.  Their staff are also people and should not be subjected to deafening diddley-eye music for hours every day, and should not have to work with so few staff on the floor that everything takes five times as long as it should.  I see their management are prompt about replying to reviews on Tripadvisor; it would be great if they took a bit of that time and improved the conditions at their bar.  The place was rammed full of people when we were there, and that was at a traditionally quiet time of year. With their relatively high prices and the money they make from their nightly ‘Hooley’ shows (if you voluntarily go to see that, you are insane) I’m pretty sure they could afford to do it.

What do you think? Have you been to Johnnie Fox’s? Would you recommend it to visitors to Ireland?