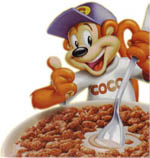 The Guardian reported recently that despite promises from food manufacturers to make kids’ food healtheir, many products that are marketed to children are still extremely high in sugar, salt and fat.

You might be surprised at some of the comparisons that the Guardian found between obvious junk food and food that is marketed as suitable, or even healthy, for kids:

Which of these pairs of snacks are better for your little darling?

1. A bite of MacDonald’s quarter-pounder with cheese? Or a Farley’s Toddler’s Own Mini-Cheese Biscuit?

2. A dark chocolate digestive? Or a Farley’s Original rusk?

3. A bite of Cadbury’s Picnic bar? Or a spoonful of Kellogg’s Crunchy Nut Cornflakes?

4. A packet of Walker’s cheese and onion crisps, or the same weight in Tesco’s Special Flakes breakfast cereal?

You probably didn’t have much trouble with that. Obviously the naughty snack choices are better for a little ‘un – there’s less saturated fat, gram for gram, in the quarter-pounder, less sugar in the digestive and the Picnic bar, and much less salt in the crisps.

The article goes on to point out that sugary breakfast cereals are a particular offender: in fact, the likes of Frosties and Coco Pops would be more suitable as a dessert than a breakfast, as some of them are up to 37% sugar.

Unsurprisingly, the food companies are still experts at spinning the nutritional information to make unhealthy food look healthy.  Some of their tactics include suggesting really tiny portions as the ‘recommended serving’.  It seems like all the public health campaigns of the last few years haven’t changed too much in this area, and we still need to read the nutritional information as closely as ever.