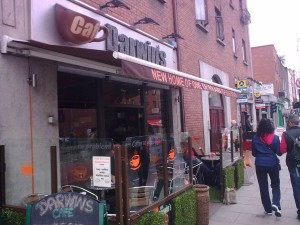 The Bald Barista boasts bean brewing that’s better than most other beverage makers in Baile Átha Cliath. Café Darwin’s doesn’t doubt the delectableness of its own draft either. Both are situated within minutes of eachother on Aungier St. Come to think of it, there’s a lot of barber shops on that stretch too. Why so many hair-related establishments on Aungier St?

Anywho, the coffee at Darwin’s. I had a latte as did Peter. Peter thought it was the best coffee he’s ever had, but as we all know, Peter’s big on superlatives.

I thought it was good. In fact, it’s a very good coffee. I have two criticisms: the first is that it was not as hot as it could be. Secondly, and more importantly, it was far too expensive. It costs €2.95 for a takeaway coffee. This needs to change. Whether you’re follically challenged or not, we shouldn’t have to pay for the damn hair transplant.

Lastly, I’m slightly sceptical of their big sign outside saying “Winner of Best Latte Art 2008.” If it was a global competition: fine. Otherwise putting hearts and shamrocks and other such shit on froth was invented by barmen for Guinness a long time ago. It was shit then and it’s shit now.