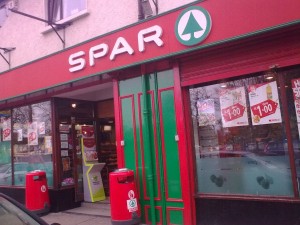 Do you ever get a craving for a crispy, white roll filled with ham and coleslaw? I decided to satisfy this craving at Spar in Clonskeagh yesterday, but it left a bitter taste in my mouth.

Like a lot of things, you never query the price until you’re at the till, and your mouth has dropped with shock. Four euro and twenty cents, for a roll with two fillings?

As I shuffled off, grumbling and cursing them under my breath, I hoped I’d at least find comfort in the roll. But compared to a ham and coleslaw roll I had in Centra a few months back, which only cost €3.19, this was miserable. The ham was slimy and fatty, and the coleslaw was over-processed. I can’t see how all the ingredients for this roll – the Cuisine de France demi-baguette, some cheap ham, and a splodge of coleslaw – could have cost much more than €1.

On my long rant about this roll last night, my departing flatmate Catriona (don’t go Cat!) pointed out that she’d bought a delicious filled roll at the generally over-priced Fresh in Smithfield that same day for €3.90.

Maybe I’m being a little unfair by singling out Spar in Clonskeagh; perhaps all the Spars are probably all just as bad. I know that their offers are pretty rubbish, as I’ve pointed out before. I think it’s fair to say that I was ripped off at Spar in Clonskeagh, but I’m curious to see what CheapEats readers think. Is €4.20 a justifiable price for a filled roll these days?