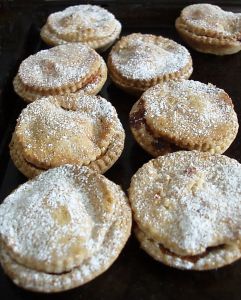 Mince pies and pudding are the quintessential Christmas treat. Both share many of the same ingredients so making your own will save you money.

Last year I made mince pies the easy way. I bought a jar of mince meat and filled some ready-made vole-au-vent cases and bunged them in the oven. They were tasty, light and worked out much cheaper than the store-bought ones.

But I’ve discovered that home-made is best. For the mince pie filling you can swap the traditional suet for butter and the traditional raisins for dried cranberries if you wish. This recipe makes enough for 24 pies.

Later this week, I’ll have some more Christmas recipes to get you in festive spirit.

Leave to cool in the tin for 5 minutes, then remove to a wire rack. To serve, lightly dust with icing sugar.