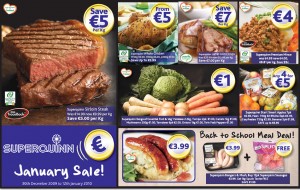 Available sometimes, if in the correct packaging, maybe

Yesterday, I posted about some good fruit and veg deals at Superquinn. So good, I thought, that I stopped in the Ranelagh branch on the way home yesterday.

I went with a very specific intention: to pick up tomatoes, onions and peppers for the dinner, which were advertised as just €1 each. But as is the way, I picked up some extra bits and pieces, and my €3 shop quickly swelled to around €15.

Right, now for what I came for. The shelves were loaded with peppers, onions, and tomatoes, but none were marked as €1. After searching and checking and rechecking, I reluctantly enquired as to whether this widely advertised offer was available. A managerial type told me that they’d “run out” of the promotional packets and that they’d be back tomorrow, or the day after. I asked if he would honour Superquinn’s own promotion by simply allowing me to pick six tomatoes, a kilo of onions, and two peppers myself. “No, they wouldn’t scan,” is all he said before promptly walking off.

I know that supermarkets do state that offers are available while stocks last, and there’s probably some tedious stock control explanation. Still I thought this was shoddy, both in the way my query was handled and the shop’s refusal to honour their own ad: a kilo of onions is a kilo of onions and I only went to Superquinn in the reasonable expectation that they’d have such basic items. A desire to get home and a need to get some food prevented me from leaving my basket in the middle of the floor, but I’ll think twice before trusting them again.

Have any readers had similar experiences in other supermarkets?