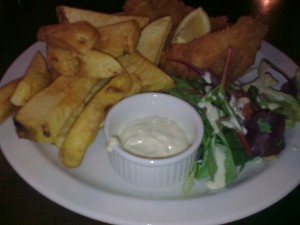 An caller to Liveline  recently complained of being charged €2.90 for dash of Mi-Wadi and some tap water. It reminded me of two separate experiences on a break in Wicklow last week .

This post should perhaps have a question mark with the Bad Value category. At the Brooklodge, I had a glass of Pinot Noir. It was really wonderful, a crisp and clean wine with rich aromas and blackberry and plum tastes. But still, when the bill arrived, my chin smashed to the floor: €11.90!  In fairness to them, I knew Pinot Noir is that bit more expensive; I just didn’t expect it would be that expensive. I chose the Pinot after the waiter listed off five wines available by the glass, but I should have asked to see the menu. So it’s all my own fault… right?

We went on an eight-mile hike over to the Hollywood Inn, one of the best spots for pub food in Ireland, where we both hummed and hawwed over shelling out €16.90 for fish and chips. At that price, it’d have to be pretty spectacular. The fish was remarkably fresh, which is to be commended for a place some 20 or so miles from the sea, and it was seasoned and battered perfectly. The chips were freshly cooked, nice and fluffy inside, crispy outside. And the portions were huge, possibly too huge, meaning even two starving pigs such as us couldn’t get through it.

In fairness to the Hollywood Inn, everything else on the menu was reasonably priced, so perhaps it really does cost them a lot to make the fish and chips. Still, no matter how good it is – and it’s certainly much better than similar offerings in most other pubs – I’m just not sure that they can fairly charge €16.95 for fish and chips.

Can any of these prices be justified? What have you found too pricey lately? And are you, like me, fool enough to pay for it?