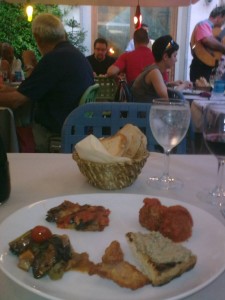 The whispers grew louder, until it became clear they didn’t care if I heard. “A man. In a spa. By himself. No, he’s definitely here alone. Nobody was with him at breakfast either. It’s very odd.”

I was on a two-month tour of Ireland reviewing spas for a magazine, so I’d become used to a table for one. Other diners occasionally gossiped and gave me pitying looks, but I really enjoyed eating alone.

As I always have. When I was a kid, I spent a lot of time in Saudi Arabia and had enormous freedom to roam the very safe Western compound. From the age of about eight, I used to take myself off for lunch in the very affordable compound restaurant, La Casa. I liked eating alone; I felt like such a grown-up, was able to focus on the food, and had some time away from friends and family.

Eating out, especially at dinner time, is generally seen as a social activity. When people do eat alone at night, it’s generally a very functional meal: they’re grabbing something quick before they head home from work, or snatching a sandwich before meeting up with friends. But who leaves their home during the week to take themselves out for dinner in a nice restaurant? People will look at you. They’ll whisper about you, and say that you’re very odd.

I bring this up because, on my European travels, I took myself out, tout seul, for dinner. It just so happened to be one of the greatest meals I’ve ever had. I stumbled on Al Signor Mimmo, a ristorante in Pisa, after several hours of exploring this very pretty, easily walkable city. 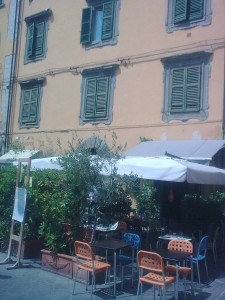 They had me at the sparkling water. Sitting outside on the patio, I enjoyed being surrounded by loud, bubbly Italian families, where well-behaved kids are welcome dinner guests. Watching people pass, with occasional violinists, tenors, and anarchist folk singers popping by for the tourist euro, while drinking a fine carafe of Chianti. What’s not to like?

Even the bread was mouthwatering: hot, fresh focaccia with a crispy, salty crust . The plate of antipasti – meatballs, breaded ham, roasted vegetables, a mini lasagna, and chicken liver crostini – had me enthusiastically racing from one flavour sensation to the next. Surely the main would let me down? Not at all: my plate of anchovies with potatoes and tomatoes had me laughing out loud, like a lunatic. Remember, I was eating alone.

A very skilled hand had taken my favourite savoury food, gently easing out the best qualities of fresh anchovies by the careful use of parsley and thyme. The fresh tomatoes were juicy enough to act as a supporting sauce, and the potatoes were perfectly integrated into the dish: no need for sides.

By now my smiling face and occasional laughter was drawing attention. Exactly how much attention only became clear later. I was slightly reluctant to take the waitress’s dessert recommendation, as panna cotta can be such a bland dish back home. But this didn’t let me down, particularly as one side was slathered in acacia honey and the other in a rich, dark chocolate sauce. The bill for bread, starter, main, dessert, coffee, a litre of sparkling water, and a carafe of Chianti came to €33.

As it transpired, my evident enjoyment didn’t lead to men in white coats. No, dinner ended rather unexpectedly. A new friend came to my table, we moved on for a drink and before I knew it, I’d been invited to spend a few days in a Tuscan villa. My table for one led to many dinners for two.

I’m sold on enjoyable meals alone, but I fear Ireland’s judgment. Do you ever take yourself out for a treat in a nice restaurant? Or do you cast curious looks at lone diners? Share your experiences here.