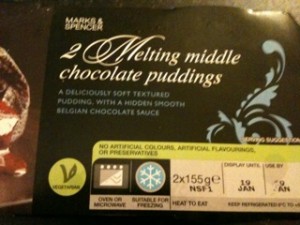 The hummus expired on January 15. The rashers are a week out of date. The milk should have been thrown out four days ago. And I’m very shortly going to eat an M&S chocolate pudding with a use-by date of January 19.

Since implementing this new year resolution, I’m fine. I haven’t been sick, nor struck by a dodgy tummy. The food still tastes good, and I’ve drastically reduced my waste.

For years, my dad has extolled the virtues of smelling your food before you eat it. Does it smell sour, or gone off? If not, then it’s not. Dad’s hardly ever sick and I’m guessing it’s because he has cultivated a fierce immune system (he also spent nearly two decades working in the dairy industry, so he knows a think or two about food).

We all use our common sense with best before dates, recognising them as merely a guideline. But use by dates are, strangely, considered sacrosanct. In reality, they’re also a guideline, with food producers keen to cover their backs. One market stallholder told me that the anchovies I bought would be good for seven days in the fridge, but quietly whispered that they’re probably good for up to ten. You’ll know by the smell.

I know of people who simply throw out food without a second glance once it’s reached the end of its official life. Big, costly mistake. So, do you eat food that’s passed its use-by date?