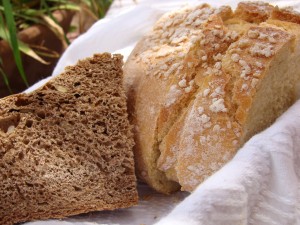 I felt very slightly queasy yesterday. The soup was four days past the use-by, but I ate it anyway because I couldn’t bear to let it go to waste. Ah, I was fine. Didn’t get sick or nothing. Grrrr…

Later that day I came across some research from safefood Ireland, which showed that one in three people think that best before and use-by dates are the same thing, while 44 per cent know there is a difference between them but aren’t sure which is which.

Really? I’m not sure how much clearer it could be: surely anybody who doesn’t get the difference is merely refusing to engage their brain. The meaning of a “best before” date is clearly an advisory that food is at its best before a particular date, but that it may begin to deteriorate soon after. The meaning of a “use by” date is clearly a direction that food should be used by a particular date or it will go off.

Safefood’s research found people waste bread more than other food (43 per cent), followed by fruit (15 per cent), dairy products (12 per cent), vegetables (10 per cent), and cooked meat (4 per cent).

There’s some obvious basics for reducing your food waste. Freeze half your bread when you buy it. Make soup with withering vegetables. Bake a cake: black bananas often end up in the bin, but Jean has an excellent recipe for banana bread which uses them up. Make a smoothie.

When it comes to throwing food out, use your good sense. Tinned foods will keep for many years after the best before, provided they are kept in a cool, dry place. Don’t throw out crisps or chocolates that have passed their best before: put them in your mouth first and spit them out if they’re a bit stale. I personally guarantee that you probably won’t die.**

My dad pays no attention to either best before or use-by dates, swearing blind that food producers tend to be over-cautious. He says that most food is good for a little while after the use-by: sniff the milk or the sausages and let your nose be your guide. He once, famously, ate a chicken that had been in the fridge for over a week.

In summary: best before is a guideline, use by is a deadline. Knowing this basic difference can prevent food waste and save you money.

But what would I know? Sure I nearly poisoned myself yesterday.

Do you pay attention to best before and use-by dates? What do you waste most, and do you have any great tips for using up food that’s reaching the end of its life?

** Disclaimer: I’m not a scientician so you’re best off not believing me and if you try to sue me because you’ve been a bit of an eejit I’ll point the court towards this disclaimer and tell them I have no money and then I’ll run away.