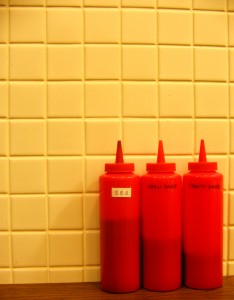 Our pal Rosemary MacCabe, Irish Times journalist and fashion blogger, is looking for your advice. Thanks for the post Rosemary!

Hi there! Seeing as I’ve stopped writing my own blog, I thought I’d send you a wee rant from an experience I had recently, because I genuinely want to know what people would think. So what happened was:

I was out for lunch with a friend, in Howth. We had wanted to go to Aqua but we arrived at about 2.45pm and their lunch finished at 3, so we opted for a place called Deep, a few doors down and, according to the window, “Ireland’s best seafood restaurant 2009” or some such.

They were doing a set menu of two courses for €20, so I had mussels and fish and chips; my companion had calamari, and fish and chips (so exciting, we are!). Everything was delicious – the portion of mussels was huge, and they were really tasty, his calamari was devoured in seconds, and the fish and chips were really excellent. BUT. The ketchup they served with the main meal was cheap, Musgraves  ketchup, out of a squeezy plastic tomato. Really vinegary and, to be frank, kind of ruined the fish ‘n’ chips for me. (Although I’m sure I’m a philistine to be putting ketchup on fresh fish.)

So when I was asked if everything was okay, I said, “well, yes, but the only quibble I would have is that the ketchup was cheap ketchup, and I would think that, in a restaurant that’s not exactly cheap, you could expect Heinz or Chef”. I was really nice about it; I wasn’t looking for anything, I was literally thinking, this could be a helpful tip.

So I really have two questions: is cheap ketchup a dealbreaker? And is €20 a lot or a little? Answers on a postcard…