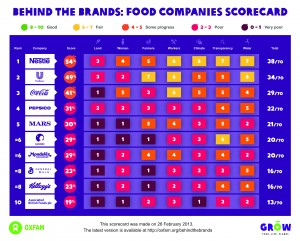 Which companies scored well, and which have more work to do? Click on the image for a larger version

Shopping is an ethical minefield. Does buying the odd bunch of Fairtrade bananas make a real difference? Is eating meat wrecking the planet? Should we only be eating organic fruit and vegetables? And who can afford all of this?  The amount of competing viewpoints confuses consumers even further. It’s no wonder that most people are a little bit lost.

A new campaign from Oxfam, Behind the Brands, aims to shed some much-needed light on the issues. In particular, Oxfam looks at the social and environmental impacts of major food and drink companies. The survey shows how Coca-Cola, Unilever, Mars, and other firms score in relation to treatment of farmers, local water supplies, discrimination against female workers. It also looks at how transparent the companies are in their business dealings.

It’s not a pretty picture. According to Oxfam’s investigations, the world’s ten largest food and beverage companies are, broadly, letting down workers and the environment, particularly impacting on the poorest people in the developing world. 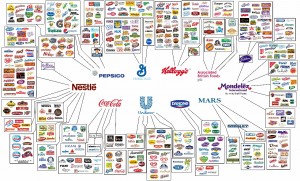 Which major brands are owned by what company? Click image for larger version

What can consumers do? Oxfam says that boycotts don’t help the workers who supply the ingredients for these major corporations, and suggest that we use Facebook, Twitter, and email to contact the companies and ask what they are doing  to apply pressure on the companies to change their ways.

The survey is a real eye opener: a huge number of well-known brands are produced by just ten food companies. Between these ten largest food and drink manufacturers in the world, they make one billion US dollars per day.

Oxfam has put together a really good online resource to help people get involved – just click on a brand and it tells you how its parent company fared. The full report also makes interesting reading, while this graphic is a handy guide to what brands are made by which of the big companies.

In a few weeks time, I’ll be writing about the issue of ethical shopping in Pricewatch in The Irish Times, and highlighting brands and shops that sell low-impact, affordable food and groceries. I’d love to hear your views. How do you deal with the ethical conundrums of filling your trolley, or – be honest – do you avoid thinking about it? Do you think shoppers can do the right thing by workers and the environment without breaking the bank?