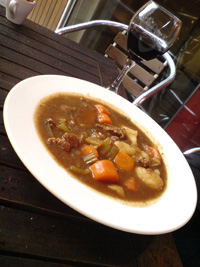 I was lucky enough to go and see Leonard Cohen in concert in the O2 a couple of weeks ago.  Oh Leonard, how do I love thee? Anyway.  Before the gig, Maria Crispy and I tried to find somewhere decent to eat in the IFSC, the particularly soulless financial services area in Dublin’s city centre.  There are plenty of restaurants in the area, but as it’s not the most enticing part of town, I didn’t really know any of them.

A thorough look on Menupages.ie turned up a few places that looked ok. We first opted for  a Thai restaurant called Kudos, which is part of the Clarion Hotel.  However Kudos was jammed, and after waiting for nearly ten minutes without having anyone even approach us, we gave up and went across the street to the New York Grind, a large diner-style place.  New York Grind was busy too – clearly, concerts in the O2 are very significant for restaurants in the IFSC.

New York Grind was offering a pre-concert menu, which had a decent amount of choice – burgers, pasta, pizza, all for around the €12 mark.  We ordered a beef stew for Ms Crispy and a burger for me.  The burger looked slightly small when it arrived, but it turned out to be very tasty and tender.  Maria’s stew was ‘hearty’, although she said it could have done with some more herbs for a richer flavour.  Service was quick and friendly, and it turned out to be a good option for a quick meal before a concert.  If I’d missed any of the concert because of faffing with food…well, there would have been trouble.