Time Out New York knew that I was coming...

I spent three nights in New York on my way back from my dreamy holiday in Mexico, and as always with New York, there’s no need to go into too much preamble.  New York = one of the best culinary destinations in the world, amazing variety, incredible global cuisines, yadda yadda yadda.  (They say yadda yadda in New York. I saw it on Sein Field.)

I’ll refrain from rubbing it in about how great it was, and just share a few quick recommendations for some of the lovely places that I ate.  I’m going back again in September so if any of you have any tips for great cheap eats in New York, please do comment below.

Pies and Thighs – a fried chicken place in Brooklyn, that got a special mention in Time Out New York’s Cheap Eats issue.  I love soul food and have never found an authentic version anywhere in Ireland. I had a delicious chicken breast with ‘biscuits’ and a side of coleslaw for about $8.

Lovin’ Cup Café -great little bar in Williamsburg where we had three delicious ‘sliders’ (tiny burgers) for €9.  It has a venue called Cameo in the back where we went to Big Terrific – a great free comedy night that featured my internet crush Gabe of Videogum.com. 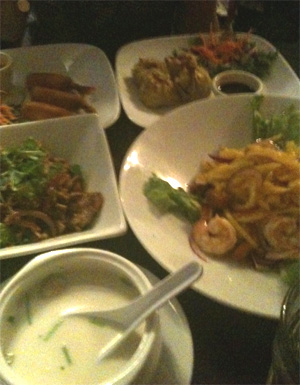 Pam Real Thai, 402 West 47th St – two of us had a giant feast and multiple beers for less than $30 each.  Very good and interesting Thai food indeed.  My shrimp and mango salad was fantastic.   It’s not the best Thai I’ve ever had in New York – that will always be the incredible Sripraphai in Queens.  But my lovely local guide said that getting good quality food for a reasonable price in midtown is always tricky, so this place is handy to know.

Fette Sau BBQ – This one’s a bit hazy as it was late, but I remember that it had a bewildering array of whiskeys and bourbons – we sampled the bacon flavoured bourbon – and really good pulled pork sandwiches.

The Smoke Joint – excellent BBQ takeaway food in Brooklyn.  There was an amazing sauce on the grilled corn on the cob – the menu says it was ‘joint rub, barbeque aioli and green onions’. I’ve no idea how to reproduce the magic at home, but I will definitely give it a try.

And my number one top tip – if you have an iPhone, the Time Out New York app is only bleedin’ fantastic.  It’s free, and helps you find recommended bars, restaurants and events wherever you are.  Even if you don’t have internet access, you can still browse its library of tips.  It was invaluable.  If you don’t have an iPhone, the magazine itself or one of its annual restaurant guides will see you right.

Something astonishing happened on the way home, that has never happened to me before – I had very good food in an airport. There’s an ersatz Irish bar called Tigin in JFK’s Terminal 4.  I had tried to get food in a McDonalds, as they’re usually the only reliable bet in an airport.  But the McDonalds was before the security gate, there were huge queues and I got the overwhelming impression that mob rule could take over at any point. I was afraid it would make me late for my flight.  I didn’t have high expectations for the $10 burger in Tigin, but it turned out to be really good; tender, perfectly cooked and tasty.  I was a bit less enamoured of the place when they charged me $9 for a beer, the robdogs.