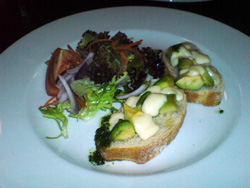 I had lunch with two friends in Juice recently. It’s a vegetarian restaurant on South Great Georges St, which has been there for a really long time – I remember eating there when in college back in the 1780s.  I’ve had evening meals there a couple of times over the years, and always felt that it was a bit overpriced.  Unfortunately nothing seems to have changed.

Two of us ordered avocado and mozzarella bruschetta (€7), but were both dismayed by the tiny portions.  I was expecting something roughly the size of an open sandwich, but the bread had clearly been cut from a very small loaf.  The bread was not toasted and oiled, as I would normally expect bruschetta to be.  The portions would have sufficed for a small starter, but were completely unsatisfying for lunch. 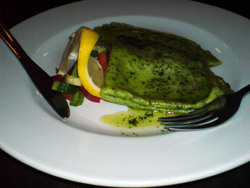 Our other friend ordered the spinach pancake (also €7), and also felt that it was a bit on the insubstantial side.  He was expecting a pancake stuffed with spinach, but instead got a green pancake (spinach in the batter, we hope) with a smear of pesto.  Side salads were uninspired, which is a shame considering that it’s a veggie restaurant.

It seems to me that the long-standing presence of Juice is largely due to a lack of competition from other dedicated vegetarian restaurants, rather than the value that they offer.  We had no complaints about the service, but they really need to rethink what constitutes a decent lunch.  They are currently offering a three course lunch for €12, but I wouldn’t have much confidence that it would offer value for money.

What do you think of Juice?  And what’s your favourite vegetarian restaurant?