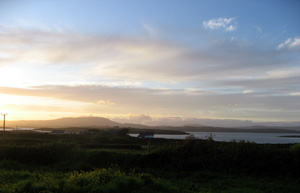 Ah West Cork, how you always fatten me. I spent a few precious days down there recently and had the usual run of fish-based excursions into the restaurant world.  Haddock so fresh it hadn’t been reported missing yet for €12 in the New Haven in Schull (which does some lovely pizza pretty cheaply too) was particularly notable. The most exciting trip, this time, was to Heir Island Cottage.

Heir Island is a great and gorgeous island, not far from Baltimore, with sandy beaches and a tiny village called Paris, to which, many years ago, my father gleefully used to bring astonished and disgusted French exchange students. The restaurant only operates for a couple of months a year and bookings are therefore not easily made. Most importantly, eating there involves a boat ride to and from the island, if you’re not actually staying out there, which adds to the fun and lends itself to excellent photo opportunities, especially as, at the end of August at least, the boat ride over coincides with early sunset.

Irish people are enormous faffers at the best of times, who are liable to head out on their summer holidays for pints that, like gremlins, multiply and cause chaos for their human cohorts.  Because of this, the restaurant demands a €20 per person deposit when booking.

Thankfully, the faffiness of others paid off for us because we got to take over a cancellation and, thereby, to enjoy a fantastic butterbean stew with some sort of balsamic vinegar thing going on, tender breast duck with orange sauce, a green salad almost casually just in from a stroll in the garden (with Gubbeen cheese), hot Grand Marnier crêpe soufflés with a blackcurrant coulis and, finally, homemade whiskey truffles. I couldn’t eat the crêpes or the truffles (or indeed the cheese), due to dairy issues for which I curse the gods, but my portions thereof were consumeded by the gentlemen at my table, almost as rapidly as they had inhaled their own, with the glazed and delighted eyes of piggy wigs.

Clearly, given that it’s an island, this is a case of a set menu, the exact details of which are not divulged beforehand, so you can be unlucky if something comes up that you don’t like or can’t have. That said, they did their best for me and I absolutely loved my meal. Per person, the meal is €45, not including wine, so it’s a special occasion type deal really, although seemingly the paying of the €20 deposit several weeks beforehand makes it feel like it’s only €25 on the night which makes it all seem very cheap at the time. Our wine was €20 for a bottle of white and €18 for a bottle of red, which wasn’t too shabby. The coffee was silky smooth. The homemade brown bread was angelic (assuming that angels have a crunchy crust and are filled with soft crumbliness).