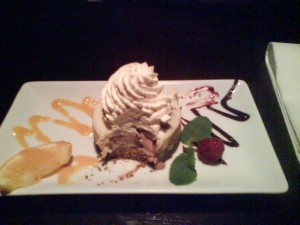 We’ve sung Koh‘s praises several times now – see here and here, and I could go on. We think it’s worth mentioning again. Of course, as with any restaurant, not everyone has had such good experiences. CheapEats reader Henry commented recently:

Our orders were taken at 8.30 (for 7.30 booking). The starters arrived and we were forced to eat these on plates from our laps due to lack of space on the 4 round tables in front of us. Following the starter, I requested to speak with the restaurant manager as I felt this was wholly inadequate for dining purposes. He was unhelpful and indicated that while he appreciated our custom, he could fill the tables on a Saturday night and typically had to refuse custom due to a full occupancy… [On leaving] we indicated to the waiting staff that while we appreciated their good service, we were very unhappy with the way management dealt with this situation. On leaving, the manager approached and indicated he did not appreciate the comment to the waiting staff.

Regular CheapEats writer Catriona McGrath had a much better experience:

On Sunday we were walking through town, having decided that cooking food for ourselves was out of the question, debating whether or not to go home and order takeaway or to find somewhere to eat when we happened to pass Koh in the Millenium Walkway.  Joan, a friend of mine from work, has been raving about it for ages now but I had never gotten around to trying it before and the opportunity was too perfect to pass up (what with how I was beginning to feel faint with the hunger).  It was around 5ish so we were there in plenty of time for the early bird menu – €20 for 3 courses or €17.50 for 2 courses – so we decided to go for that.

From the moment we got into the restaurant I knew we had made the right choice.  We were seated in a booth and the restaurant was quiet enough that it felt like there was just the two of us there.  We had a bottle of wine – a chilean riesling – for €23 – I had the two courses and Jimmy had three.  The service was excellent, though I’m sure this was helped by the fact that the place was so quiet, but not overbearing – I hate when waiting staff are overly attentive and you almost feel like you should be inviting them to join you at the table.

For the starter I got the baby back ribs and Jimmy had the samosas (there was also a choice of Chicken Satay skewers or spring rolls).  The ribs was amazing… the meat just fell off the bone it was so tender and the sauce was delicious.  They were devoured in no time.  The samosas were good too, but not the best I’ve ever had.  They were mildly spicy and served with a kind of sour cream dipping sauce (I’m sure the chef would be livid if he heard me describe his sauce like that but anyway…).  Overall I thought they were a bit bland and we both agreed that the ribs were winning the evening so far.

For the mains I had the tofu pad thai and Jimmy had the thai green curry.  I’m not much of a curry connoisseur but it seemed to be an adequate Thai Green Curry; at any rate he cleaned his plate and appeared very satisfied with his meal!  I am however a Pad Thai connoisseur and this one was definitely up to scratch.  I know sometimes pad thai can vary in spiciness; this one was not spicey and that was perfect for me.  The tofu was the perfect consistency (if you like tofu which I know a lot of people don’t) and overall I really enjoyed my meal.  The other choices on the early bird menu were Red Beef Curry, Chicken Cashew Nut, and Singapore noodles.

The piece de resistance has to be the dessert though.  I was so full from starter and main that I passed on dessert – the choices were ice cream selection, banoffi pie, or mars bar cheesecake – but Jimmy decided to take one for the team and order the mars bar cheesecake.  Amazingly, as soon as his cheesecake was placed in front of him I miraculously found space for just a bite or two.  It was AMAZING!  I took a picture but only after we’d both already started devouring it.  It didn’t taste exactly like mars bar but it did ooze caramel when when you broke off a bit with the spoon and was just so tasty.  I would go back just for that if I knew what days it was going to be on the menu as ‘Koh made dessert of the day’.

Joan, I apologise for not following your recommendation sooner, I will definitely be going back to Koh.

What’s your experience of Koh?