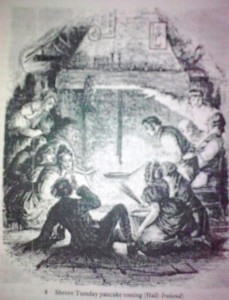 Today is the only day of the year where you can eat dessert for breakfast, lunch, dinner, and dessert, and nobody can question you. A simple pancake filling of warm raspberry jam with a topping of fresh whipped cream and honey is just one of deliciously distracting possibilities. My friend Roisin – the queen of breakfast – fills the pancake with blueberries, banana and maple syrup. I keep going back to the old reliable: more melted butter, fresh lemon juice, and sugar.

Pancake Tuesday connects us to our past and our European heritage. Since at least the early middle ages, people across Europe took to the streets for the public revelries of carnival before the harsh austerities of Lent. In Ireland – grimly, some might say – no such carnival; the festivites were primarily held in the home, with family and friends gathered around the fireplace and cooking up a feast.

Marriage was off the cards during Lent, so Shrovetide became a popular time for weddings. It was also an occasion for telling the future:

The family group – and the “boys and girls” of the neighbours – gather round the fireside; and each in turn tries his or her skill in tossing the pancake. The tossing of the first is always alloted to the eldest unmarried daughter of the host, who performs the task not altogether without trepidation, for much of her “luck” during the year is supposed to depend upon her good or ill success on the occasion. She tosses it, and usually so cleverly as to receive it back again without a ruffle on its surface, on its reverse, in the pan. Congratulations upon her fortune go round, and another makes the effort: perhaps this is a sad mischance; the pancake is either not turned or falls among the turf ashes; the unhappy maiden is then doomed – she can have no chance of marrying for a year at least – while the girl who has been lucky is destined to have her ‘pick of the boys’ as soon as she likes. The cake she has tossed, she is at once called upon to share, and cutting it into as many slices as there are guests, she hands one to each: sometimes the mother’s wedding ring has been slipped into the batter out of which the first cake is made, and the person who receives the slice in which it is contained, is not only to be first married, but is to be doubly lucky in the matter of husband or wife. Men are also permitted to have a chance; and it is a great source of amusement to jog their elbows at the important moment, and so compel them to “toss the cake crooked”. 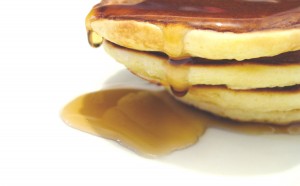 Meat and diary were once off the menu for the entire duration of Lent, and unlike their profligate descendants, people wouldn’t tolerate waste: all the milk and butter had to be used up (And let’s face it, any excuse for a party).

Some Shrove Tuesday customs were far less palatable than pancakes. In parts of Co. Kilkenny in the 19th century, boys loved nothing more than to spend their day pelting roosters with sticks. In Skibereen, Co. Cork, the boys liked to let off home-made firecrackers. But nothing beats this popular Shrove Tuesday tradition: licking a lizard would endow the tongue with a cure for burns.

So, how will you be cooking your pancakes this year? A feast with family and friends? Or will you be too busy organising weddings, firing stones at cocks, and licking lizards?