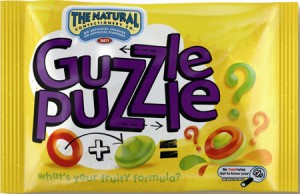 Guzzle Puzzle is for kids, right? So when, oddly, a few packets of The Natural Confectionary Company’s new product arrived in my letterbox from a PR company, I figured I’d ask my nephew for his opinion. Here’s his view:

Guzzle Puzzle tastes exactly like Jelly Worms, made by the same company. Most people I know love them, but I do not like them at all.

When you mix them, they’re supposed to give different flavours. But I do not think they taste like the flavours they say they do. Raspberry + lime does not make pink lemonade, orange + banana does not make bubblegum, and lime + cinnamon does not make cola. I’d eat them plain, rather than mix the flavours. If I want a cola sweet, I will eat a proper cola sweet like a cola bottle.

I don’t really like Guzzle Puzzles but I would eat them if someone gave them to me.

So, there you have it, from the kid’s mouth…