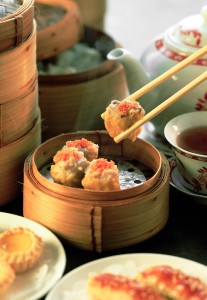 It was a long day on Halloween, and I spent it at my nephew’s 7th birthday party. Cooking dinner was the last thing I felt like doing after spending the day entertaining 15 sugared-up little boys. So, Jim and I decided to check out a new dim sum and Chinese restaurant in Ranelagh, Mak at D6. I hadn’t heard much about it but we were in the neighbourhood, hungry and looking to try somewhere new.

For a start, what a lovely space! We were seated by a very friendly hostess at the window looking out onto the busy triangle. The restaurant was quiet enough: Halloween night in Ranelagh and all the mums and dads are busy taking their darlings trick or treating. We noticed that the tables weren’t too close together and the acoustics were perfect, creating a pleasant low hum, especially after the noisy day we’d had.I love dim sum but have never found anywhere in Dublin that matches up to the great meals I’ve had in London. Mak at D6 has a great selection while also offering traditional Chinese cuisine. We ordered two bottles of Tsingtao beer (€5.25) which, personally, I think is a little expensive for a small bottle of beer, but it’s good beer all the same.

On to the food. We asked our server for recommendations on the dim sum so after some deliberation we decided on Pork Bun (€5.50), Steamed Black Bean Ribs (€5), Prawn & Bamboo Potstickers (4 pc €6.50), Salt & Pepper Calamari (€6.50), Aromatic Duck Pancakes, ¼ (€9.50) and a side dish of Singapore Noodles (€4.50). Oh my, but everything was delicious! So, so good. Stand out mentions to the potstickers and the calamari, both the best I’ve ever tasted in Ireland. The calamari almost made me weep tears of joy.

I probably wouldn’t order the pork bun again, there was absolutely nothing wrong with it but I’d never had it before and it just wasn’t to my taste. We were a bit worried when everything came out that it wouldn’t be enough but after we’d eaten we both felt satisfied without feeling horribly full. The meal wasn’t very cheap, including sparkling water our bill came to €53.90, but anywhere with small sharing plates can add up, the quality is so good it’s worth it, and it’s in Ranelagh, which is basically its own micro-economy.I’m already planning on going back to Mak at D6 with friends over Christmas. I think sharing dim sum makes a nice change to the same old set menus everywhere in December. It’s definitely going to be one for many repeat visits.