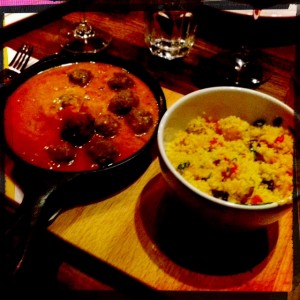 A note from Peter and Jean: We’re delighted to have Rebecca on board as a regular contributor to the site. Rebecca is a full-time massage therapist and a part-time food lover. She’s been a regular commenter here since we kicked off over three years ago, and she’s contributed a number of guest posts to the site. We love her style and her very keen eye for a great food photo. She loves to cook but, more importantly, she loves to eat and has dedicated much of her spare time over the years to all things culinary. Rebecca lives in Dublin with her soon-to-be husband, Jim. Okay, enough. Over to you Rebecca…

Ranelagh has become a bit of a foodie haven in the past decade. I grew up there and have seen plenty of change since the 80s and 90s, when it was all chippers, grim cafes and the utterly depressing Pronto Grill. Now a new spot seems to open almost every other month, with The Butcher Block, Bodega, and Milano amongst the newer additions. We’re spoilt for choice – or are we?

For all the restaurants and eateries in Ranelagh, only a handful stand out as being good. For me, Dillingers is king, and where I end up most often. TriBeCa is long-standing for a reason: they are consistent, tasty and reasonably priced. Eatery 120, Kinara Kitchen and The Wild Goose are all lovely, but expensive, and really only for special occasions. I’ve eaten everywhere else and have been either disappointed or, at least, underwhelmed. So when I heard about a new food hall called Cinnamon I was hopeful. Something along the lines of Avoca or Fallon & Byrne for Ranelagh is a fantastic idea.

The first time I went in, they’d only been open for a couple of days. It was two o’clock and we were seated at a lovely table towards the back, then informed that the kitchen was closed and they weren’t serving lunch, only drinks and pastries etc. The very young waiter was defensive when I raised questions about it. They’d obviously been having a tough week, but we were starving and coffee and a scone wouldn’t do, so we left. I understand all restaurants suffer teething problems, but we should have been informed of this before we sat down.

Not one to be deterred, I headed back a few weeks later with Peter for a quick dinner and another nose around. On this visit I noticed how badly laid out the room is. It looks great and their fit out is top notch but the shelves are scattered throughout the restaurant area, which feels a bit like you’re eating in a supermarket aisle – I know I would be uncomfortable browsing the produce if there were diners right at my backside! They should move the retail items to the front of the store and keep the large area to the back exclusively for dining.

Onto the food, it was… well, okay. The menu consists of casual plates of food, ranging from antipasto plates to hearty dinners, and plenty of wine choice. We ordered a small carafe of Rioja, €11.95, and a bowl of olives, €3.50. Our olives came along at the same time as our dinner, which rendered them rather pointless. Peter, sensibly, wanted to send them back but I was too much of a wuss and said I’d still eat them. In fairness, they were nice olives!

I had Moroccan Lamb Meatballs, €15, served with couscous, I can’t rave about them but they were fine. Peter had Beef Goulash, €16, served with mash, he seemed happy enough but not particularly blown away. For dessert we shared Mississippi Mud Pie, €4.95, which was good but could have done with some cream or ice-cream, and two very mediocre coffees, €2.60 each. Our bill came to a total of €43.70.

The service was odd. Our waiter, again, was very young and he was chewing gum in a most unpleasant fashion. This is a bugbear of mine: waiting staff should just not be allowed to chew gum. He seemed slightly dazzled the entire evening and there were lots of other confused looking staff wandering around. We left relatively happy and full, although – given the prices and location – I think that Cinnamon has a long way to go.