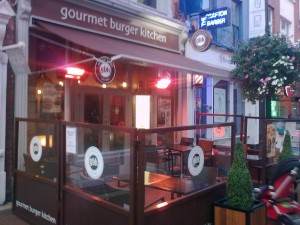 Gourmet burgers. Already, before I finish this sentence, one of two things is happening:

2. You’re discovering that you have something called hackles, watching with a sense of distant horror as they rise, spluttering at the indecency of something so prosaic as a burger – a burger! – calling itself “gourmet,” and directing your outrage at the burger itself, as though the entire burger was alive and able to talk, before choking to death on a profound sense of your own outrage.

Pipe down, number two. I used to be like you. But in the past month or so, I’ve been sampling some of Dublin’s best and worst burgers, and a few places have stood out. I’ll start today with Gourmet Burger Kitchen and mention some other hot and not spots next week.

Now, I’ve had my beefs with “gourmet” burgers. For the Comedy Festival in the Iveagh Gardens during the summer, the radio ads gave “gourmet”  equal billing alongside the comic genius of David O’Doherty, Maeve Higgins, Bo Burnham. Festivals used to serve up cold, flat, dead, miserable, and greasy burgers. Now, just because we have standards and demand a certain level of quality, the burgers are suddenly worthy of a gourmand. Yes, the burgers at the Comedy Festival were nice, but “gourmet”? Maybe in price.

GBK, however, has made me reconsider my use of inverted commas around the word gourmet. There, I’ve dropped it. Last week, I met my friend Elaine at their Liffey Valley branch, where I chowed down on a very tall Chicken Satay burger, filled with some very fresh salad, mayo, and relish. It was a really substantial meal, and great value too.

Last night, I joined my sister Barbara and her 15-month-old son Dylan for some shopping, and I suggested GBK on South Anne Street might be a welcoming venue for kids. Indeed it was: Dylan settled down into his high chair and was given some crayons and paper to throw on the floor while Barbs and I had our dinner. She chose the old reliable, a cheese and bacon burger. I went for a Mexican burger, a beef patty with sour cream, avocado, spicy kidney bean salsa, mayonnaise, and salad. I can’t fault it in any way.

I’m really starting to like the gourmet burgers at GBK. They have a very tempting selection, the meat is always great quality, and the buns are fresh, crispy, and loaded with the gentle taste of sesame seeds. Delicious. GBK also serve the best onion rings around: they’re clearly made fresh on the premises. The chips are reliably wonderful too, served with rosemary salt that had me sucking up crispy shreds of herbs from the end of my bowl. And don’t even get me started on the genius idea of smoked chilli mayo. Wowsers.

Somebody at GBK has clearly decided to use their imagination, and I hope it pays off. The service on South Anne Street was flawless. Our two serving staff – a waiter and waitress – were friendly, patient, never too far away, and willing to help and make suggestions. The waitress very kindly helped my sister when she needed to change the baby. Then, when Dylan entertained himself by throwing food on the floor and making a mess (in fairness, we didn’t disturb any other customers around us), the waitress  firmly insisted that my sister was not to clean up said mess before leaving. “It’s a restaurant, he’s very welcome here, and it’s no problem at all for us to clean it up,” she said with a very genuine and kind smile. She clearly meant it. Barbs and I were so impressed that we left a 25 per cent tip.

The total bill for our two burgers, a side of onion rings, a side of chips, a portion of smoked chilli mayo, one beer, and a Coke came to just €24.50 after we availed of a two-for-one voucher.

Readers, what do you think of GBK and other “gourmet” burger options?